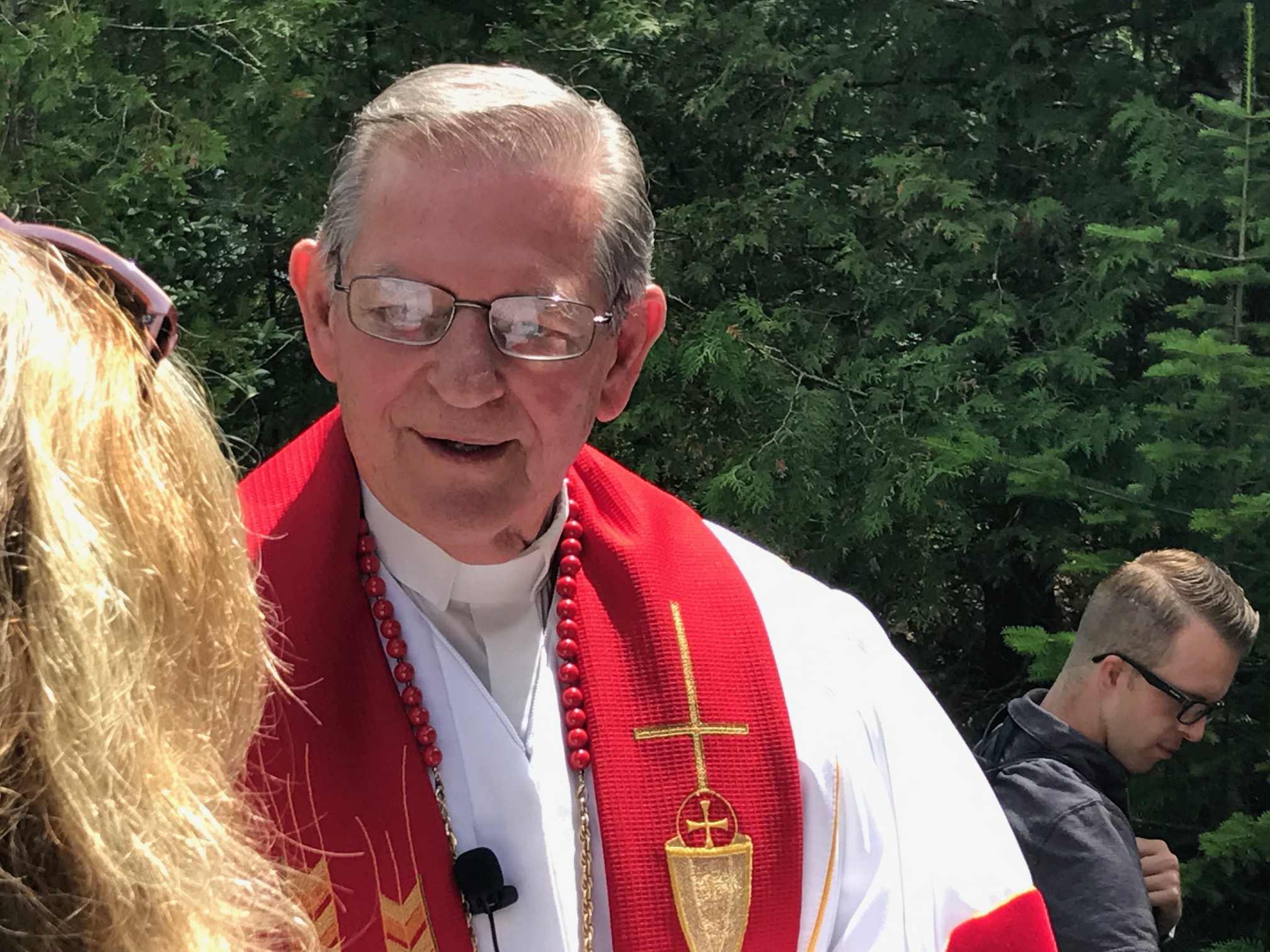 Rev Olsen grew up in Staten Island, where he was active in Boy Scouts and the neighborhood Lutheran Church. He earned a BA in Religions from Wagner College in 1980, and in 1987 earned a M Div. from the Lutheran Theological Seminary at Philadelphia. He was ordained in 1988, serving first at the Lutheran Church of the Holy Trinity in Saranac Lake.

In 1984, Eric became a Chaplain Candidate for the US Army, and upon his ordination he was commissioned a Second Lieutenant. He served with a Reserve unit from 1988 – 1992, when he became a full-time Army chaplain. While on active duty, Eric served in South Carolina, Germany, Egypt, and New York. In 2000, Eric left the Active Duty and transitioned to the New York National Guard. On 09/11/2001, the state activated him again. He was deeply engaged with the recovery work at Ground Zero for many months. He deployed to Iraq with the 2/108 New York National Guard in 2005. When he returned from combat, he continued active National Guard service as first the Division Chaplain and then the NYNG Joint Forces State Chaplain until he retired from the military as a full Colonel in 2014.

Eric now works as the Protestant Chaplain at Adirondack Correctional Facility, and serves, again, as Pastor of the Lutheran Church of the Holy Trinity and the First United Methodist Church, both in Saranac Lake. Eric is married to the former Susan Nagle, and their two sons are completing college at SUNY Potsdam while serving in the New York National Guard.

Dr. Newton W. Greiner is a retired United Methodist Minister from the Greater New Jersey Annual Conference where he served churches in 3 different communities over a 15 year period. He then went on an appointment beyond the local church to Brookdale Community College, Lincroft, New Jersey, where he attained the title of professor in the Student Development Department and retired after 25 years of service. Dr. Greiner resides in Plattsburgh, New York in the winter, and affiliates with The Plattsburgh United Methodist Church. Dr. Greiner is a retired York state licensed Marriage and Family Therapist. He has 3 children, 5 granddaughters and 4 great grandchildren.

In the summer Dr. Greiner resides in Saranac Shores, a development just across the lake opposite the Island Chapel front doors. Dr. Greiner has been affiliated with Island Chapel for 50 years. He leads worship on the Fourth of July weekend and directs an impromptu choir each Sunday. During his pastoral ministry Dr. Greiner was responsible for building 2 new Church Sanctuaries. In his years at Island Chapel he has performed 100 weddings and Baptized a number of children.

Shane is an ordained minister in the Church of the Nazarene.  Shane served as pastor for 15 years, most recently in Kansas City, MO.  Shane and Ashley and their three children (Sam, Addi, Anah) moved to the Adirondacks a few years ago. Together they are restoring a small farm near Saranac Lake. Shane currently serves as Chaplain at the Col. C. David Merkel Veterans Residence at St. Joseph’s Recovery Center. Shane’s passions include spiritual formation, the Enneagram, farming, and writing.

Rev. Black retired from full-time pastoring at the end of 2016, after serving over 40 years as senior pastor of churches in the Midwest and Northeast.

Raised on a farm in Rome, NY, the 5th of 6 children, Jeff graduated from Hamilton College in 1967, married Barbara Tyler shortly thereafter, and received a Fullbright grant to study and teach in Strasbourg, France, where their son Jerry was born.  The family then moved to Indiana University, where Jeff studied Renaissance and American literature for 4 years, while Barbara earned her degree and their daughter was born.  Jeff received his calling to ministry there and moved to seminary in Chicago.  Ordained in 1975, he served churches in Wichita, KS for 10 years, Kansas City, MO for 10 years, planted and served a church in Austin, TX for 13 years, and finished by serving in Orange, MA for 7 years.  These congregations included both Episcopal Churches and Evangelical Covenant Churches.

Jeff retired in December of 2016 and moved to Saranac Lake.  He and Barbara have been married for 52 years.  Their son Jerry and his wife Cathy have two sons — Myles (15) and Alex (13); their daughter Stephanie and her husband Stephen have one daughter Rome (13).  Jeff and Barbara worship at First Presbyterian Church in Saranac Lake and enjoy the mountains, their home and dogs, music, and volunteering.

After 41 years as an American Baptist pastor, I retired from the full time ministry but am still doing the things I love. I work with Habitat building houses, volunteer with the Penn Yan Fire Department, serve as director of the American Baptist Men Disaster Relief for New York State, and preach at strange, beautiful, and out of the way places. I hold a masters and doctorate (DMin) from Andover Newton Theological School. I write, do woodworking, and take long distance bicycle trips — the next one is planned for a few days from now from Penn Yan to Decatur, Illinois. My wife and I love the Adirondacks and enjoy kayaking, hiking, and mountain climbing. We have three children and two dogs.

Rev. Dr. Colin Tuggle serves as pastor of the Tupper Lake United Community Church. He is also the founder and executive director of ADK Mission: a charitable non-profit organization based in Saranac Lake (ADKMission.org). Colin and his wife, Lisa, work across denominations to strengthen churches and ministries throughout the Adirondack Mountains by encouraging and equipping area pastors and their families. Colin was born and raised in southeastern New York, and his family has owned property outside Tupper Lake for more than 50 years. Before relocating to this area six years ago to launch ADK Mission, Colin served in pastoral ministry following several years in business and the military. After graduating from the U.S. Naval Academy at Annapolis, he later earned his master’s degree from Regent University and a Doctor of Missiology from Fuller Theological Seminary. Colin and Lisa have been married since 1997 and are blessed with two young children: Caleb and Grace.

Paul Kelly is a somewhat retired priest of the Diocese of Ogdensburg and currently resides in Coreys. He spends a couple of days a month helping out at Sunmount in Tupper Lake. He provides services at the Uihlein Nursing Home in Lake Placid. On weekends he often helps out with coverage at parishes and institutions. Father Kelly enjoys hiking, birding and picnics.

The Rev. Dr. Renée Tembeckjian serves as Rector of Trinity Episcopal Church in Fayetteville, New York, having previously served as Diocesan Director of Spiritual Formation and pediatric chaplain at Upstate Golisano Children’s Hospital. A licensed psychologist in longtime clinical practice, Renée is also a highly sought-after speaker and preacher.  Born and raised in New York City, she lives in Manlius with her husband, Thomas Zino, and has two grown sons, James and William. Having seen and heard about Chapel Island last summer from friends on Birch Island, she was immediately intrigued and is delighted to preside at a Sunday service this season!

Ted Tate was ordained in 1967 by Troy Presbytery.  He served four churches as full time pastor, then spent 20 years as part time pastor in Crary Mills and at Western Adirondack Presbyterian Church.  In retirement he and Rae Louise have spent time rehabilitating homes in NNY and the Gulf Coast, and relaxing at Wanakena.

The Rev. Dr. Larry Selig, former Presbyterian pastor in Saranac Lake, Willmar, Minnesota and Pittsburgh, PA, resides with his wife Ida near Orlando, FL. Since retiring, they have “recycled” to assist churches in the United States and abroad in leadership development, teaching, preaching, and prayer ministry. One of his additional passions during the past 40 years has been taking pastors and lay people on study trips to the Holy Land.