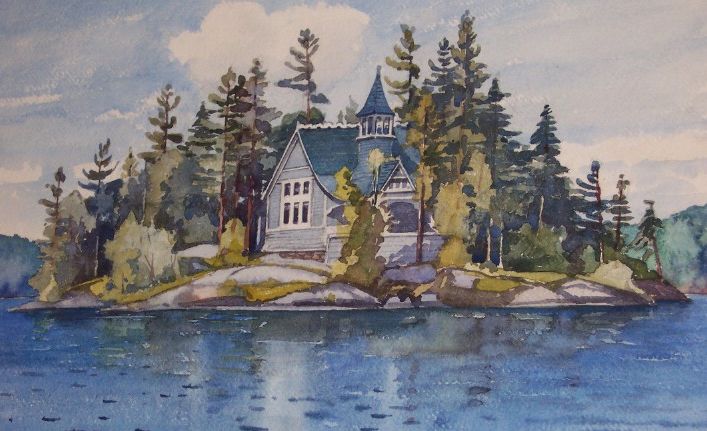 At the southeast end of Upper Saranac Lake in the Adirondack Mountains of New York State, the glaciers formed a rocky island approximately one acre, measuring 150 feet at its widest diameter. This is Chapel Island .

In 1889, Smith Weed, Martin Turner and John Riley, lawyers who were practicing in Plattsburgh, NY, acquired this island which was then known as Johnson’s Island. According to the abstract, it was to have a chapel built on it within 1 year and would be open to all Christians worshippers and clergymen in good standing. It was later known as Church Island and finally as Chapel Island.

The original building was a Victorian style building painted gray with white trim. Across the front was a deep porch approached by a stairway at each end. This building served worshippers until disaster stuck in August, 1956.

Apparently, picnickers had had a bonfire and thought that the fire had been extinguished. However, it would appear that the fire smoldered and spread among the peat, pine needles and moss until it reached the porch of the Chapel. Despite the best efforts of those living and working in the surrounding area, the Chapel burned to the ground. Through the efforts of many dedicated workers, the Chapel was rebuilt and reopened for services on July 22, 1958.

The existing chapel is now 50 years old and looks much like the original replacement of 1958. Some slight repairs and improvements have taken place through the donations of those who have cared so much for Chapel Island. However, stepping on this island and into this chapel takes one back to a simpler time and the beauty of the lake and the mountains enhances the services and weddings held here.

The above information came from A Chapel on an Island written by the late Dr. Junie Potter, an advocate of Chapel Island and a lover of the Adirondacks. This booklet is available for $5.00 before and after Sunday services.